The Queen Mary ship – haunted by ghosts, rich of stories of patriotism and crimes from the history of one of the most famous Trans-Atlantic ocean liners of our world.

Clearly, the Queen Mary haunted ship history began once the city of Long Beach California decided to buy from Cunard this so special ship and to convert it into a floating hotel and museum. And about the new ship – follow this link for the RMS QM2 cruise ship itinerary and schedule with prices to compare.

Why is the RMS Queen Mary haunted?

The world’s most famous ship hotel has at least 49 reported passenger/crew deaths from the QM ship history, and the official statistics say this hotel is haunted by at least 130 ghosts/spirits. Since the ship was moored in Long Beach CA, several employees and quite a number of guests have experienced seeing ghostly creatures and hearing mysterious sounds. And, of course, the plausible explanation is these are the ghosts of people who have died on the ship. 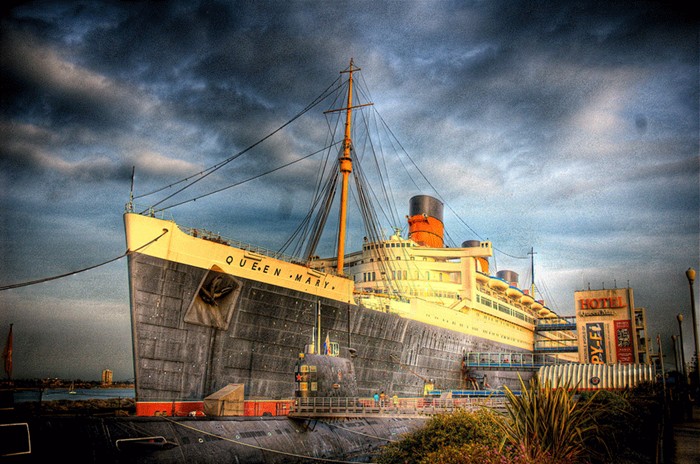 The Queen Mary “haunted ship” business is prospering ever since. The hotel’s officials make pretty good money out of it by selling ghost tours. Some of the ship tours are “normal” (operated during the day), while others include dramatizations of the incidents for a way more eerie experience. They also have “upgraded” the area adding a maze on QM hosted during Halloween – a most popular Long Beach attraction. Now, just to indulge your curiosity, we offer you a concise info on the Queen Mary haunted tour hours and tickets prices:  it’s offered from Monday through Thursday (from 11AM to 6PM) and Friday through Sunday (from 11AM to 7PM). The tour lasts for appr 35 min and costs US$35 (per adult, and yes – it’s a buck per minute) and $24 (children 5-11 yo). You can check the Wikipedia’s “rumors of hauntings” – about the “supposed haunting marketing and promotion of the ship”.

The haunted Queen Mary ship tour will show you the most “spooky famous” sections of the ship, where guests may enjoy special effects with fog, really loud speakers, lighting & video dramatic recreations of ghost encounters. We do have this idea to cover more aspects of this amazing ocean liner of the past (and obviously of the present) with an additional article about the Queen Mary ship hotel in Long Beach CA as hotel-boat experiences (accommodations, dining, attractions, weddings and other services). And totally without the ghosts! So visit us again soon for more pricey spicy information of this never dying and forever “Cunard” cruise liner.

While it seems like the Queen Mary haunted ship is a real beacon for paranormal phenomena, this is one old big liner full of history and charm. Whether you are a skeptic or true believer in the paranormal world of the Queen Mary hotel, this ship and its tours are a great option to enjoy one special evening on one of the most famous ocean liners of all times. The fact is, the combination of a big set of world-class ghost stories and an elegant dinner at a classy restaurant is a special offer that not so many people can refuse! I guess if you consider the “dinner & tour of the haunted ship” option, you’ll probably get all dressed up for dinner. But be sure to choose more comfortable shoes! There are a lot of stairs needed to climb at the Queen Mary ship, and a lot of ghosts to run from!